Perfume is an important product attribute that differentiates a given personal cleansing product from others in a crowded market. However, it remains technically challenging to incorporate a high % of perfume oil (≥ 2%) into shampoo or shower gel formulations without adverse effects on clarity, target viscosity, and foaming. This technical challenge has become more significant as the market continues to move towards skin friendly non-sulfate cleansing formulations with non-sulfate surfactants such as alpha olefin sulfonate (AOS) and mild amino-acid based surfactants such as sodium cocoyl glutamate.

All surfactants are composed of a hydrophilic head and a hydrophobic tail. When the ratio of head area/tail area is > 3, the geometric packing of surfactants in water favors a small spherical micelle structure, which leads to a very low viscosity. When this ratio is between 3 and 2, the curvature of surfactant structures is reduced, leading to the formation of a rod micellar structure which creates viscosity. In essence, larger rod micelles equate to higher viscosity (Fig 1.).

The hydrophobic tails of all surfactants and hydrophobic thickeners are composed of a C8-C14 alkane chain which precludes any significant modifications.. Thus, the ideal location to influence and manage surfactant packing geometry is the hydrophilic head group.

Owing to charge-charge repulsion in water, the head groups of primary anionic surfactants have an effective head group area larger than their actual physical area. Incorporation of salt into formulations

The clarity and viscosity of a personal cleansing formulation are extremely sensitive to the relative concentration of several key components in the formulation, including perfume oil. Fig.2 illustrates how the incorporation of additives to increase viscosity or improve clarity can have unintended consequences (The color of the bars correlate with clarity). The cleansing formulation in Fig.2 has 17.5% surfactant actives and contains 20% SLES (70% conc.), 10% Cocamidopropyl Betaine, and 0.1% EDTA at pH 5.5. Salt, which is used to increase viscosity, causes the formulation to become opaque with or without 3% perfume. Alternatively, the addition of 4% Glyceryl caprylate/caprate (GCC), a hydrophobic thickener, increases the viscosity effectively while maintaining a desirable clarity. However, the formulation again becomes opaque with the addition of 3 % perfume. A classical approach to enhance clarity is to incorporate a perfume solubilizer. While the addition of 3% PEG-40 hydrogenated castor oil (HCO-40) is ineffective, the addition of 3% Polysorbate 80 improves clarity but significantly decreases viscosity. In sum, many of the common core components in surfactant formulations, including salt, perfume, hydrophobic thickener, perfume oils, and perfume solubilizers can produce unexpected negative effects on clarity and viscosity above certain concentration thresholds.

Figure 2. Conc. of Many key Components Affect the Clarity. 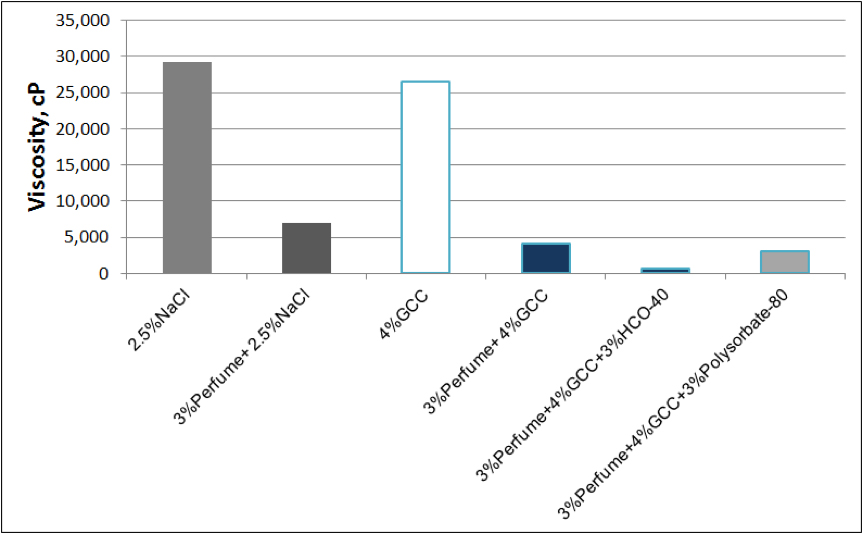 Fig.3. (a) and (b) show the molecular models of SLES and amino-based sulfate-free surfactants and their likely micellar structures and sizes. The hydrophilic head groups of the glycinate and glutamate surfactants are larger than that of SLES surfactants (Fig.3.a). Hence, they are more difficult to formulate into long rod micellar structures to achieve desired viscosity levels (Fig. 3b)as the resulting micellar structures will be smaller and more numerous. In practice, commercial shampoo, shower gel, and other personal cleaning products must contain perfume oil, extracts, actives, preservatives, chelators, etc. to differentiate their brands and to appease their target consumers. Any of these additives may interrupt the packing of surfactant molecules in water, resulting in a low viscosity. To maintain shampoo clarity, perfume oil molecules must exist as micro emulsions or be packed inside of surfactant micellar structures and/or perfume solubilizers. Overall, in modern sulfate-free surfactant formulations, especially clear and high perfume oil formulations, micellar structures are frequently a mix of a larger number of small and short rod and spherical micelles, leading to consistent issues with low viscosity. 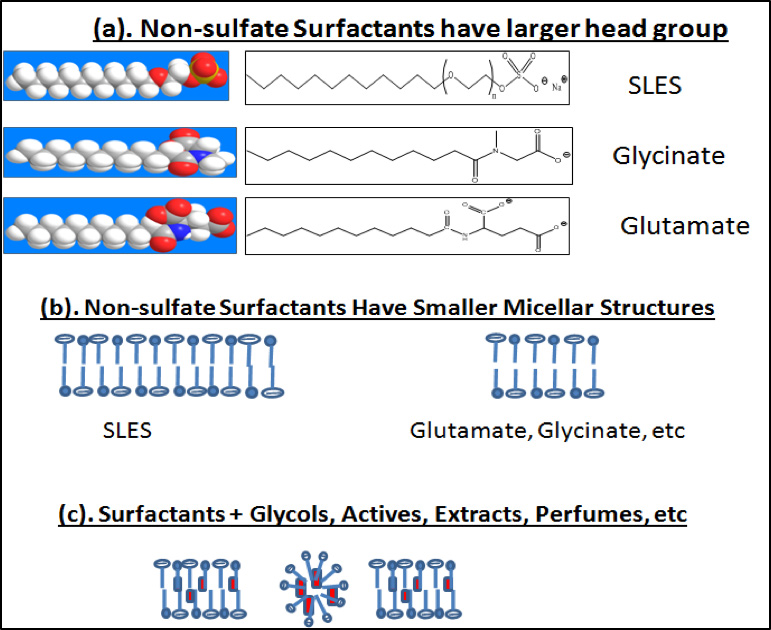 Sorbeth-230 Tetraoleate is a new non-ionic associative thickener with six arms, developed for thickening sulfate-free surfactant formulations. It is derived from natural sorbitol with ethylene oxide to have six hydrophilic arms. Subsequent reactions with the natural oleic acid form four hydrophobic interaction oleic groups at the end of the arms. Fig.4 illustrates its molecular structure and the chemical reaction steps. Its trade name is SorbiThix L-100 with an INCI name of Sorbeth-230 tetraoleate (and) Decyl Glucoside (and) Sorbitan Laurate.

A comparison of the viscossity of the same model cleansing formulation in Fig.2 - 20% SLES (70% conc.), 10% Cocamidopropyl Betaine, and 0.1% EDTA at pH 5.5, thickened with a range of the commercial thickeners with different arms numbers two arms- REWOPAL OEG 600 DS A ( PEG-150 Distearate), three-arms- Antil 200 [ PEG-200 Hydrogenated Glyceryl Palmate (and) PEG-7 Glyceryl Cocoate], four- arms- Crothix Liquid [ PEG-150 Pentaerythrityl Tertrastearate (and) PEG-6 Caprylic/capric Glycerides (and) water], and six arms- SorbiThix L100 [Sorbeth-230 tetraoleate (and) Decyl Glucoside (and) Sorbitan Laurate] is shown in Fig. 6. While all formulations are clear, SorbiThix L-100 is clearly the most efficient.

With this new six-arm non-ionic associative thickener, it is now significantly easier to develop a clear personal cleansing formulation with high perfume oil, such as shampoo. Table 1 details three practical shampoo formulation examples, which are clear with 3% perfume oil, from three surfactants: SLES, AOS, and Glutamate.

Figure 6. Effect of # of Arms on Thickening Efficacy 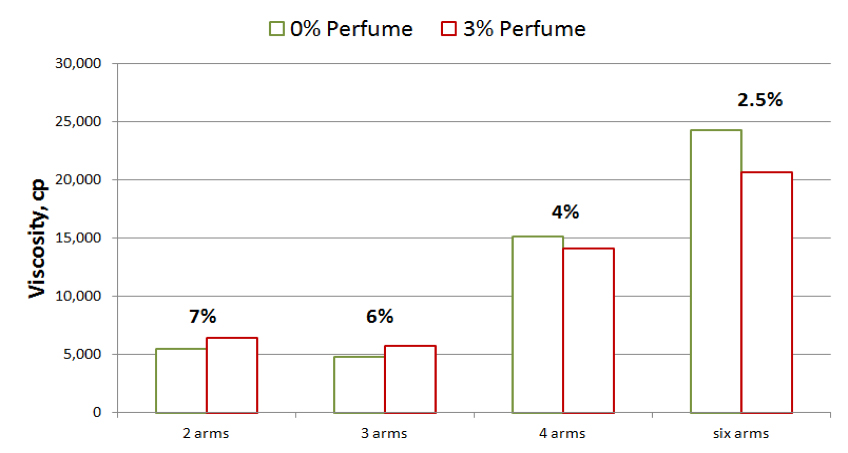 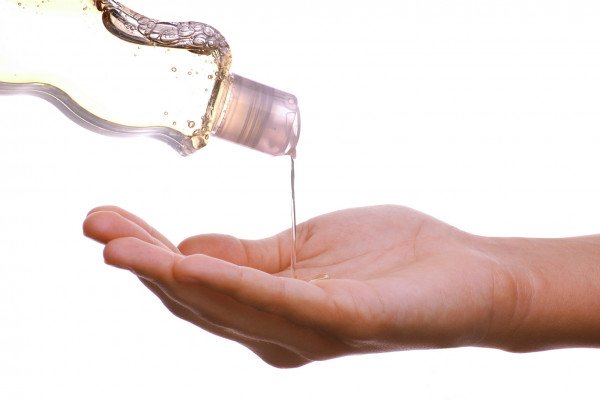 Menu
This website requires javascript. Please enable it or visit HappyBrowser.com to find a modern browser.